The Sierra de Grazalema is mountainous area of the andalusian region of Cádiz whose eastern foothills extend to the northwestern part of the province of Málaga. The area was appointed the first official Nature Park of Andalusia in 1984 and named Biosphere Reserve by the UNESCO.

The Sierra de Grazalema is a limestone mountains whose highest peak rises up to 1654 m. Due to the high precipitation rate it is characterized by an exceptional green and rich vegetation. Because of its geographical location, this mountain range is the first hurdle for the upcountry clouds from the atlantic which rains here. The sierra’s eponym village Grazalema is the most rain-laden site throughout Spain.

Beyond that, the Sierra de Grazalema is well-known for its wide fauna variety. Not least because of the great offspring colony of griffon vulture, one of the largest in Europe, the area has been designated special protection zone for birds.

In terms of tourism, the Nature Park has seen considerable growth rates in recent years. In particular for ecological and active tourists the area is a popular holiday destination.

Moreover the Sierra de Grazalema has a lot of culture to offer. Both Moors and Romans have left there mark here over the centuries.

In the Sierra de Grazalema you are in direct contact with nature. A fact that provides perfect conditions for the exercise of outdoor leisure.

The Nature Park of Sierra de Grazalema offers ideal conditions for active holidays. The possibilities are versatile and the range of leisure activities are widely.

Although the cultural heritage of the region is particularly marked by the Moorish civilization, there still exist some remnants of ancient Roman architecture.

The first settlements dates from the Roman reign, for example the founding of the capital Grazalema. Also an old Roman road between Benaocaz and Ubrique remained. From the struggles in times of the Reconquista (Reconquest by the Catholic Monarchs) testify the fortifications, such as Zahara de la Sierra

. Besides, the Romans founded the cities Ronda (called under the Roman rule "Acinipio") , Ubrique ("Ocurí ") or Prado del rey ("Iptuci") . 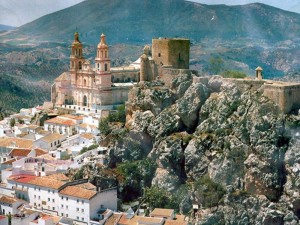