The Sierra de Aracena is a nature park with low mountain range character of the Andalusian province of Huelva, situated about 120 km north-west of Seville. The area has been designated Nature Reserve in 1989 and is part of the biosphere reserve pastures of the Sierra de Morena.

The natural park is particularly characterized by a high forest cover, mild climate and high rainfall and awakens, due to its natural and cultural heritage, the curiosity of young and old.

The unique fauna of the Sierra de Aracena provokes special interest. One example is the Iberian lynx: until a few years ago endangered, the animal was “reared” in protected enclosures and gradually released into the wild.

In addition, the area is well known by the breeding of the so-called “black pig”, a half-wild pig which is feeded with acorns. Ham and other meat products of this animal are guided by the words “ibérico”, a quality seal for the origin. The “Jamón Ibérico de Bellota” (“Iberian Acorn Ham”) is world famous.

An eye-catcher are the famous gardens which are primarily for self-sufficiency.

The Sierra de Aracena offers unlimited possibilities for sports activities in a natural setting because of their vast forests and river landscapes.

Mountainous landscapes, forests, rivers, caves ... everything is possible in the Sierra de Aracena: The Nature Park is ideal for hiking and climbing tours , kayaking and canyoning , excursions by bike or even caving.

Although the Sierra de Aracena is known primarily as a nature park, it also offers a lot of culture and history. There are several villages and some larger cities that have an impressive cultural heritage.

In Aracena you will find a variety of old churches built by the arabic in the famous Mudéjar style. In particular, the Iglesia Prioral de Nuestra Señora del Mayor Dolor and the Iglesia de Santa Maria de Asunción are popular cultural attractions.

Also the ruins of the historical "Castillo" of Aracena are worth seeing.

However, the absolute highlight are the Grutas de las Maravillas ( the wondrous caves ), a 2 km long subterranean complex of caves, of which more than 1 km is passable. 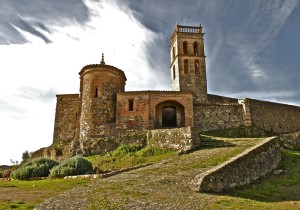