Los Caños de Meca is a small village with only 280 registered inhabitants. In the late 1970’s the location still didn’t even exist. The first buildings were settled bit by bit  and came along with the hippie movement of that time, which still today characterises the townscape.

The village is primarily famous by its varied and beautiful coast which extends from Cape Trafalgar to the cliffs of La Breña where large and fine sandy beaches alternate with stunning rocky cliffs and fascinating coral reefs.

In the last years the location has been expanded by the construction of some appartments and little hotels, without however affecting its idyllic charme.

The leisure and activities offer in Los Caños de Meca is wide-ranging and versatile.

Here are some suggestions on how to pass your holidays actively:

On the magnificent beaches of Los Caños de Meca all variants of surf are practiced throughoput the year. The most popular versions among locals and tourists are wind and kite surf.

You should not miss to try it by your own or to learn it at one of the many schools in the surroundings.

Learn more about Surf on the links below:

Discover the subaquatic world of the most beautiful part of the Costa de la Luz. Los Caños de Meca is the ideal place to explore extraordinary coral reefs, sea caves and old wrecks under water.

We recommend a 2-day course to obtain the so-called "Under Water Diver"-certificate or participate in a guided trip to the unique diving spots.

Fishing in the sea by a rocky cliff or direct on the beach has its special charm and is hardly comparable with softwater fishing.

There are lots of specialized shops in Los Caños de Meca and its surroundings for appropriate equipment:

The area around Los Caños de Meca offers an amazing and unique landscape which is a pleasure for nature lovers. The best way to discover the coast scenery and countryside is by bike, on horseback or by foot.

Thanks to the former hippie movement, Los Caños de Meca has developed its very own nightlife momentum. In the summer season it takes place mainly at the charming beach terraces and lounges. Some of them styled as "Jaima"-called beduine tents with fine music and relaxed atmosphere.

But this is just an introduction. As well known, spanish nights are long. So if you want to go on clubbing, you can do that in the famous Ohjú Club where comercial house music is played until dawn.

Culturally, Los Caños de Meca has rather little to offer, which is mainly due to its short history and the small size of the location.

So, for those who resides in Los Caños de Meca should not miss a trip to the neighbouring Vejer de la Frontera.

Another attraction is the formerly Moorish fortress on the highest point of the town, which was rebuilt during the reign of the Catholic Kings.

The coastal tower known as Faro de Trafalgar, which should protect the area from attacks from the sea and whose name is reminiscent of the naval battle between Spanish and British "armadas", is another cultural highlight of the region. 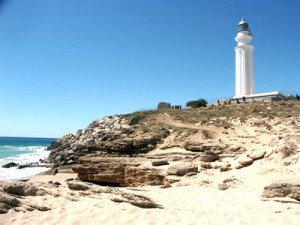